Through measured investment and continuous improvement we provide a comprehensive on-site plastic mould shop delivering low to medium volume production runs. We use cutting edge moulding machines to offer a high quality thermoplastic moulding service. Our moulding technicians keep up with modern plastic processing techniques through training and are focused on process optimisation on every production run and trial. We have provided a technical moulding service to industry since we were established in 1972 and support our customers with our combined wealth of knowledge.
‍
We are experienced in processing all high engineering grades of thermoplastics, including LDPE, HDPE, PEEK, TPE, NYLONS to name a few.  Glass filled, UV Stabilised and Flame retardant materials are also material specifications that we are widely experienced in processing.
We use 12 Injection Mould press which range from 22-280 tonne locking power with maximum shot weight of 450 grams and a range of modern ancillary equipment including , material dryers and conveyors. Customer parts are manufactured on horizontal moulding presses with computerised control and a dedicated process monitoring system. This is linked to the ERP System for greater control and traceability.

The ERP supply chain system provides full visibility throughout the thermoplastic injection moulding and overall production process, with fully detailed bills of materials and routing operations for each individual component. A contract review is performed on all new purchase orders and the production process is controlled through inspection monitoring with dedicated quality plans for each part in the scope of our certified quality management system.

When it comes to thermoplastic injection moulding we have years of experience and we have worked on a huge range of project types. Please get in touch to discuss your requirements today.

What are the key factors of a product trial?

What industries are we strongest in?

Our experience in high engineering thermoplastic injection moulding, including filled and unfilled grades means we can advice and support both material selection and processing in production. The range of moulding machines has been purposely stepped closely in size. This is so we can provide you with the best possible service on delivery through flexibility in production scheduling. We work with our customers to establish the best ordering a patterns be it  made to order, scheduled call offs or bespoke Kanban agreements.

If you are looking for thermoplastic injection moulding then get in touch today to discuss your requirements.

There a few key reasons why injection moulding your component may be the best solution as detailed below:

Thermoplastic injection moulded parts can be highly detailed to perform specific tasks required. Ideally the shape required would be created in the mould tool to maximise efficiency and cost especially for medium to high volume production. Alternatively for low volume production component detail can be added as a post production operation to reduce initial start up cost.

The injection moulding process can provide a flexible solution whether the volumes are in the 10’s or the 1,000,000’s.

By carefully considering the annual usage and life expectancy we can design and manufacture suitable tooling to meet your demand.

Injection moulding is a process that can produce the simplest to the most complex parts providing volume production in a short cycle time. Machined parts that would take hours to manufacture can be produced in seconds.

Parts are produced from mould tools that do not change from shot to shot or run to run. This provides excellent repeatability during the production process.

To support this it is essential that we provide consistent process control and traceability at every stage.

One of the biggest advantages of thermoplastic injection moulding is the ability to sample various material types at the development stage.

Thermoplastics can have many different additives to meet specific application such as flame retardancy, UV stabiliser, glass fill or biocompatibility amongst many other options. This will ensure the product meets the specification and is fit for purpose.

Detailed below are a few more widely used materials and why they might be selected:

The product design is a key process as the part has to function effectively but it must be designed in a way that allows it to be injection moulded. A few key pointers are listed below: -

A consistent wall thickness is essential where possible. As the plastic solidifies in the mould it freezes from the outside toward the inside and this can create varying shrinkage rates especially in thick sections. This can be seen in the moulded part by way of sink marks on the outer surfaces, warpage and distortion or through creating stresses due to the contraction of the parts.

Plastic moulded parts which have thick sections can be subject to excess shrink, sink, internal bubbles, voids and poor cosmetics. This is due to the fact that plastic shrinks as it cools from the molten injected state to solid room temperature parts.

Coring out is a technique where material is removed from a part leaving uniform walls and sometimes ribs which provide enough strength and mating surfaces for other parts in the assembly. Coring out is necessary to make the part mouldable and also saves cost and weight.

Surface finish on a plastic part can serve many functions be it cosmetic or functional. Textures and lettering can be moulded on the surfaces as an aesthetic aid or for incorporating identifying information for end users. Texturing also helps hide surface defects such as knit lines and other surface imperfections. The level of finish can be limited by other factors and extra draft needs to be incorporated to allow for withdrawal of the part from the mould without damaging the surface.

It is essential to be aware of drafting at the early design stage. Draft angles are generally required on side walls to allow the part to be extracted from the tool without dragging against the tool surface. The minimum would be 0.25˚ for a polished surface.

Draft for texturing is somewhat dependant on the mould design and the specific texture requirement. As a general guideline, 1.5˚ minimum per 0.025mm depth of texture needs to be allowed for if  fine texture is applied. More draft may be needed for heavier textures up to 7.5˚.

The following information has been collated to provide a guide to the surface finishes that we can achieve through polishing or electrical discharge machining (EDM).

The injection mould tool can be a complicated and costly capital investment at the outset of a project but it is imperative that the right tool configuration and the specification is right to meet the product demand.

Below are two examples of mould tool configuration: - 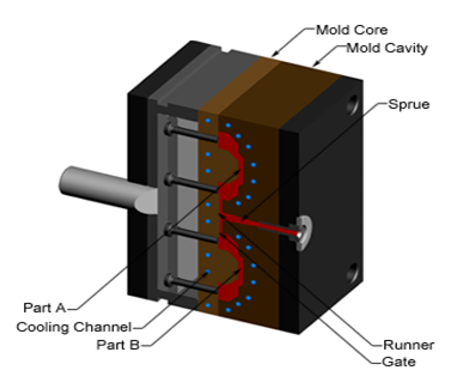 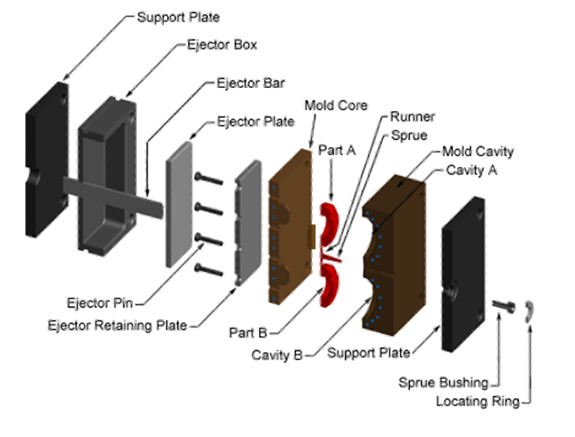 If you are looking for thermoplastic injection moulding then get in touch today to discuss your requirements.

Interested in working with us?
Get in touch today to get started.

If you want to start a project or just have a question about our plastic injection moulding services; we are always here to help.
Visit our work with us page for estimated tooling costs.

Work With UsContact Us